I just received this from our Namibian friend and associate, Gert Botha. He’s in the middle of building an innovative home in the Namib Desert. It’s not far, by the way, from the massive sand dunes in which the opening scenes of THE CUBE were filmed, and some of his ancestors were Khoi San, the bushmen of the Kalahari Desert. 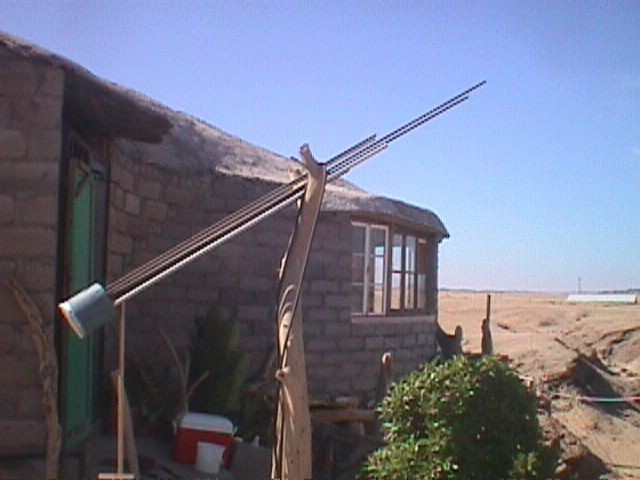 Considering the elements and obstacles he’s had to deal with, I hope his account will encourage those of us who are more timid to go ahead and make a cloudbuster 😉

By they way, our St. Louis, Missouri cloudbuster colleague informed us that her CB has been causing chemtrails overhead to disappear, leaving a very large hole in the streaks of chemtrails across the sky. Take THAT, I.G. Farben!

[8/5/01–we’ve since found, in Spokane, Washington, that a cloudbuster’s field increases to destroy chemtrails up to 30 miles away]

[as of Oct 5/01 we winessed all chemtrails being destroyed between Spokane and Seattle cloudbusters, a distance of 270 miles]

[on March 10, 2002 we witnessed chemtrails being destroyed in Kamloops, BC, 150 miles from th nearestt cloudbustem, which isr in Chilliwack, British Columbia]

The Wingmakers, or my guides, or whomever decided that I needed some gentle pressure, were driving my crazy – they even invaded my dreams, the persistent entities . . . . 🙂 So, finally, today I decided (even though I was overwhelmed by various crises) to just do it (and be damned!?). [to build a cloudbuster ~D] Interesting thing. I started early this morning, during the early stages of a typical desert sandstorm: Strong wind from the northeast, picking up speed by the minute . . . . What was strange, even hair-raisingly-so, was, while I was pouring the first layer of orgone generator, the wind suddenly went crazy: It started gusting from oposite directions . . . . . Then east, then west . . . Then north, then south . . . . By the time I was finished with the CB (pointing straight up), the wind has changed direction 180 degrees, and was blowing, quite strongly, from the southwest . . . . Now, 12 hours later, it is still southwest, the temperature has dropped by a good 30 degrees Celsius, the humidity has increased also by a good 30%, and the climate is almost humanly bearable 🙂 Now. It could just have been coincidence . . . Or it could have been me, influencing the weather . . . . . Time, and several more experiments, will tell . . . . The present CB was built with “whatever was handy” . . . — I used 7 pipes (dreamed it! – and there they were . . . !!??): One 3/4 inch copper pipe, in the middle of the circle; just under 6′; with my only ‘floater’ quartz crystal – donated by a friendly, young witch, glued inside). On the circle, two aluminium pipes, 3/4 inch, opposite sides, with my best needle crystals glued in. The other four positions, two 1/2 inch copper pipes, around 6′, and two 1/2 inch pipes, around 10′. The orgone generator part more resembled an HHG: Resin, plus stainless steel, mild steel, brass, etc., shavings, pieces, cuttings, etc., plus numerous quartz needle crystals, beryl, ‘herkimer diamond’ quartz crystals, rose quartz-wind-polished-pieces, feldspar crystals; whatever caught my fancy . . . . . Strange, that I had exactly enough of everything (and i mean exactly!), to finish the CB – the notion came to me, to call it an “Equalizer” . . . . . And so far, that is exactly what it did . . . . . . . Strangely enough, I did not worry about building one ( I dreamed it, after all . . . . 🙂 – it came to resemble your design in a large way!) — I was reluctant to build it, because I did not know how much control I would have after the fact . . . . . 🙂 Well, now it’s done . . . . SEPTEMBER, 2001 ~by Gert Botha, Swakopmund, Namibia, Southwest Africa.

Wow–you had ‘almost rain’!! And only after two months. I think it’s going to happen for you.

And now it isn’t ‘almost raining’, it is raining cats and dogs!!! Howzat!? All around, I can see serious lightning and rain . . . . Must confess, didn’t think it would happen this quickly 🙂 And it IS most unusual – we’re only a few days into officially ‘spring’ – and we only get rain in Namibia at the tail-end of the rainy season for this part of Africa. That is, from February onwards. Being furthest out west, the Namib usually only gets rain (IF it does), from March onwards . . . So, to get rain (and this wide-spread) in the Namib in the first week of September, is totally unheard of . . . Make of that what you want 🙂

It is now two and a half hours later (had a lot of running around with buckets and various other hollow receptacles . . . ), and still I can see lightning 360 degrees around us . . . Hope I have not started a second Great Flood . . . . 🙂

Very exciting weather, this, you truly understand the meaning of “elemental” . . . .